Dutch electric vehicle manufacturer Lightyear unveiled their initial EV, the Lightyear 0, on June 9, and claims it can nearly eliminate trips to charging stations due to a solar array it installed on the car.

Lightyear claims its optimized solar roof, which covers the length of the vehicle, will keep drivers charged for weeks, or even months, without ever having to plug in. According to the automaker’s press release, the solar system offers 1.05 kW charging speed, which will accumulate up to 10 km/h per hour. The Lightyear 0 will still offer plug-in charging at varied rates that top out at 520 km/h with a fast-charging capable EV stall.

Lightyear said the vehicle has a 625 kilometer, or 388-mile, range rating thanks to a 60 kWh battery pack, that still has to be finalized by the WLTP. It has a drag co-efficient of 0.19, topping the Lucid Air, which achieved a 0.21 last year. Interestingly, Lightyear did not mention performance specifications for the vehicle.

Lightyear is breaking all the rules by planning to use a solar panel-based system with a vehicle. In the past, other automakers have attempted to utilize solar panels to increase EV range, but it did not make much of a difference in range and increased the price of cars considerably. In 2017, Tesla CEO Elon Musk said that solar panels on a vehicle are “not that helpful,” because a car is typically not large enough to house enough solar panels to accumulate a considerable amount of energy. “The least efficient place to put solar is on the car,” he said, according to Quartz.

However, Tesla and other companies may be considering a solar panel array on vehicles, as there may be some advantages in especially sunny climates. Tesla filed a patent last year that would see the company put a solar array on the Cybertruck tonneau. While the Cybertruck is set to enter production early next year, and Musk nor Tesla have confirmed the all-electric pickup will outfit this strategy, it is still something the company may consider.

The Lightyear 0’s interior is also sustainable and eco-friendly. Materials, such as the high-quality fabrics, are vegan and plant-based, a strategy both Tesla and Volvo have adopted in their vehicles. The outer body panels are also made from reclaimed carbon, while wooden deco elements in the cabin are made from sustainably-restructured rattan palm. 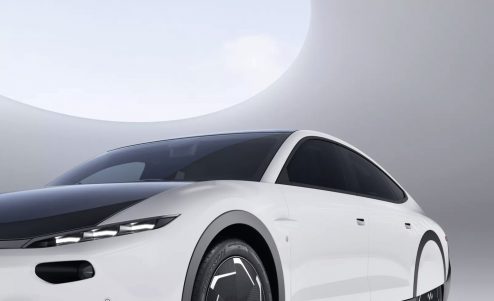 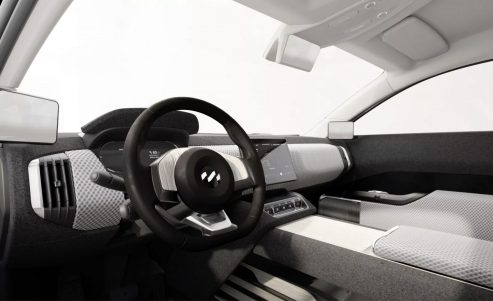