For Andy Hill, sustainability is a common theme throughout his life.

He owns a socially responsible investment firm that evaluates the environmental, social and governance impact of companies as well as their projected returns.

He has driven a Tesla electric vehicle for the past three years.

And he’s had traditional solar panels on his home for more than 10 years.

So, when it came to replace his roof, Mr. Hill wanted the next generation of solar. The name of that system was familiar to him: Tesla.

“It’s such an obvious solution,” Mr. Hill says. “It makes power during the day, stores it all along, and charges my Tesla Model X when I come home from work. It’s a smooth system.”

The Tesla roof is fairly new to Florida. Naples-based Kelly Roofing is the exclusive installer of Tesla roofs throughout Florida, having been tapped by Tesla for this role.

The company has installed six Tesla roofs in Collier and Lee counties during the past 18 months and about 50 statewide. 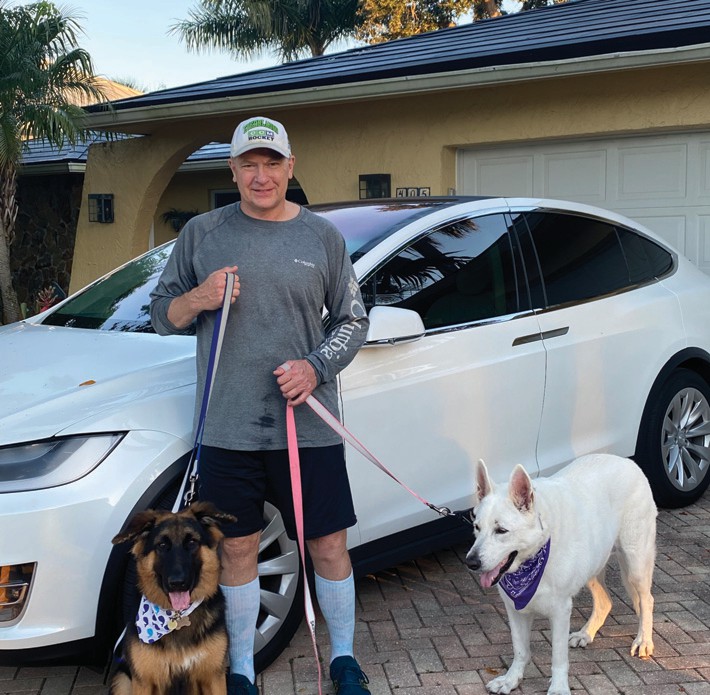 Right: A Tesla solar roof was an obvious solution for Andy Hill, who says, “It makes power during the day, stores it all along, and charges my Tesla Model X when I come home from work.” COURTESY PHOTOS

“The early adopters were taking the leap of faith with Tesla to get the roof system installed on their home,” says Javier Diaz, a Kelly Roofing project manager. “Now that we have proof of concept, demand has ramped up.”

Tesla solar roofs are the first and only solar photovoltaic (PV) array that is both the roofing material and the power-producing panel in one. This gives the roofs a seamless look, with the “active” tiles virtually indistinguishable from the regular tiles.

“The roof has that Tesla cool look,” Mr. Hill says. “You see something’s different about it, but you don’t know what it is.”

The black tempered glass tiles are flexible, making them highly unlikely to break. They are more than three times stronger than standard roofing tiles and are engineered for all-weather protection, rated for winds up to 194 miles per hour.

While traditional solar panels need to face south, the Tesla active tiles are placed on each roof after a computer program determines how much sun they will receive. About 20-40% of tiles are typically active.

A power inverter takes the direct current produced by the sun and translates it to alternating current, feeding into a home’s electric panel.

Optional powerwalls can be installed in a garage and act like a whole home generator, providing electricity at night and if the power goes out.


FPL buys back extra electricity that is generated. Other than about a $10 minimum customer fee and taxes from FPL, Tesla solar roof owners do not pay an electric bill.

“In Southwest Florida, we have an amazing net metering program with FPL,” Mr. Diaz says. “As you’re overproducing during the day, you’re sending back to FPL and they’re giving you a credit on your energy bank. You can pull them back during the nighttime and not be charged for it.”

Another benefit of this system, Mr. Diaz notes, is that there is one contractor for the roof, not one for the roof and another for the solar system. This holds one company accountable for any issues.

And, he says, “there is no warranty on the market like Tesla’s,” which is 25 years for materials and power output of active tiles plus 10 years for workmanship.

The roofs do not require any maintenance or power washing, and they won’t fade or collect mold or mildew.

Pricing is based on the size of the roof, a home’s typical electric bill, and the number of Powerwall battery backups a customer purchases.

The financial incentive was part of the decision for Richard and Diane Ponton, whose house near Golden Gate Estates received the first Tesla solar roof in Collier County last December.

“The tax credits of 26% were a big bonus,” says Mr. Ponton, adding that he and his wife are teachers, so these savings made the price tag “almost bearable.”

The Pontons wanted to protect the environment and also have a return on their investment, so they bought a smaller 6.5-kilowatt system and did not purchase any powerwalls.

They are pleased with the results.

“Our electric bill was just over $200 a month. Our goal was to cut it in half, and that’s exactly what it’s doing,” Mr. Ponton says.

“Tesla has been really helpful answering questions,” Mr. Ponton says. “Everything is computerized. I see a daily report and the amount of energy I’m generating. They see the same data and tell me if I need to reset something. They been very, very good.”

Mr. Hill says Tesla roofs are an “obvious” trend like the development of so many more electric vehicles.

“I think all builders should be including the Tesla solar roof as an option when constructing new homes,” he says. “In five years, they’ll be wishing they had recommended them. It’s an enhancement of value and sustainability. And if people convert to electric vehicles, which most people will in the next five years, it all blends nicely together.” ¦