Cars And Solar Panel Roofs- Is There A Future Here? – Saurenergy

To reduce pollution caused due to fossil-fuel-powered ICE vehicles, the techno-world has developed and adopted various technologies to substitute fossil fuel as a source of energy. Electric cars have been one of the biggest bets  to achieve zero-emissions mobility. Some of the automotive giants like Volkswagen Group, General Motors, etc., have already begun to sweep the market with their electric mobility options. Tesla with its Model 3, Audi and its e-Tron, Ford Mustang Mach-E, Hyundai Kona, etc. have been the models establishing their market presence in recent years and months.

EVs are dependent on battery technology for their fuel. In order to refuel, the battery plug-in stations or swapping points are used, just like gas stations for ICE vehicles. Which is where the first nitpicking starts. As grids remain powered by fossil fuel backed energy, detractors point out that electric cars are simply substituting one fossil fuel for another when they recharge. When you think about it, there are two obvious ways around this argument. One, to use solar panels to charge the cars directly, and two, to ensure EV charging stations are powered by renewable energy. As well see here, the odds of achieving the latter are way higher than the former.

Solar Roofs On Your Car

Until now, the roof of the car has been the most logical place to consider placing solar panels. The energy generated through these solar roofs is then utilised for running the vehicle, or actually, some key auxiliary equipment. Further, the cars may store the energy in the battery, so that when there is no availability of direct sunlight – like cloudy days or night time – the stored energy may be used to power some devices in the vehicle.

But are Solar Panel Cars Viable?

To meet the energy needs of a typical home, a solar array covering 500 square feet would be the basic requirement. But what would suffice the energy requirement of an electric car?

Few years back, a study was done to evaluate the number of solar panels that would be needed to charge an electric car. Accordingly, the study found out that a small sedan model, Nissan Leaf, at around 50 miles per day, would need a total of 3.44 kilowatts of solar panels. Even with the highest output panels today of upto 800W, we would need at least 4 of these on a car to make enough solar energy to power the Nissan Leaf driving 50 miles. Unfortunately design and logistics dictate that only one or a little more can be placed. Hence, insufficient availability of surface area makes the concept quite unfit for practically use.

Yet, this doesn’t stop the automakers in their efforts to use this concept in the cars. Some of the automakers like Sono Motors, Lightyear Automotive, Karma, Hyundai, and Toyota, and their products, have already been successful in making the idea work. They have been helped along by advancements in solar panel design and flexibility. However, many of them can’t be called “solar-powered”, as they require unfeasibly multiple hours of charge for a very short range without any external battery aide. These hybrid electric vehicles make slight amount of additional electricity with the help of solar cells.

Another intriguing yet impressive concept is EV charging powered with solar roof. This not only gives a clean energy generating source but electric vehicle charging stations (EVCSs) with solar rooftop photovoltaic (SRTPV) facility are economically more viable than those with the grid. However, in this case too, for now, solar powered basically means using solar to power key instruments like the display unit, not the actual charging, as fast charging output is simply not possible with a solar rooftop at site. Yes, a separate, large ground mounted solar plant could power such stations provided a large energy storage set up also exists. But that takes costs to an unacceptable level for now.  With solar carports becoming larger by the day, expect to see a carport that doubles up as the power provider for cars parked underneath sooner than later.

Sono motors offer the Sion Electric in Europe while the car may arrive in America in 2023. With its 35 kWh of battery, it comes with a range of an estimated 158 miles (255 km) per charge. Interestingly, Sono Motors claim that the car gets up to 34 kilometres of range per day using solar cells only.

With around 248 solar cells on its roof, hood, trunk, and sides, Sion is offering one of the largest solar spaces on a car in the market, with the whole surface of the car producing 1.2 kW.

Another contender with solar-roofed vehicle is the Lightyear One model. It is highly expensive compared to Sion. But the high cost isn’t for nothing as the Lightyear One comes with a 60-kWh battery. Further, the car’s sleek design helps to provide almost 3 times the range that Sono can offer. The car has a remarkable range of 710 kilometers.

Another striking feature would be the roof of the Lightyear One that contains 5 square meters of solar cells. They are so densely arranged that the solar panels on its roof and hood gives about the same generating power as Sono gives with its almost whole-body solar design.

Furthermore, Lightyear claims that the One can get 12 km (7.46 mi) of range for every hour it spends under the bright sun.

Hyundai Ioniq 5 come with two battery sizes and two drivetrains: AWD (All Wheel Drive) and RWD (Rear Wheel Drive). One standard 58 kWh battery offer up to 200km/125 miles of range, and the 72.6 kWh long-range battery can provide up to 500km/310 miles on a single charge. Ioniq 5 has solar panels on its roof which act as a complementary to the otherwise battery-powered electric vehicle. Solar-power was chosen for advantages in boosting mileage, meeting emission standards, vehicle operator convenience, and savings. Hyundai claims the yearly add-on range of 2000 km (5-6 km per day) by harnessing solar energy alone.

Hyundai probably went a step ahead with its Ioniq 5 CUV (crossover SUV) model with its ability to charge other electric vehicles, and even e-bikes, e-bicycles, and personal electronics. When above 15 per cent, it may be plugged to charge another EV. The car’s charging speed of just 3.6kW. 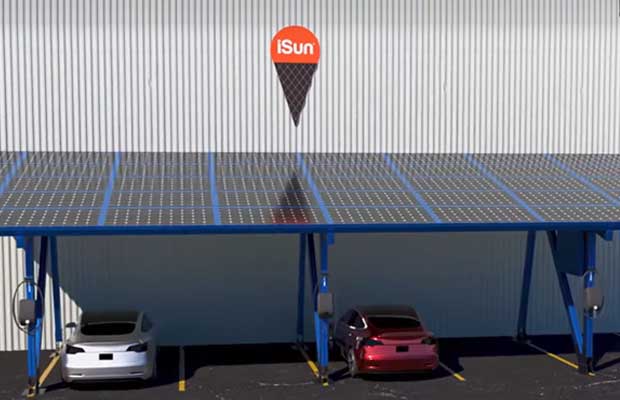 A grid-connected electric vehicle charger is also slightly cheaper than an Off-Grid charger that stores the power in batteries.

Electric Vehicle Autonomous Renewable Charger requires no connection to local utilities. The batteries are the storage points of the solar energy generated through the panels. Consequently, this storage point provides with charging needs of the EV.

Thanks to no requirement for a connection to the electrical grid, Off-grid electrical car chargers can be placed virtually anywhere.